Over the summer, one of my favourite YouTubers (a sunshine-flavoured, fantastical whimsy of a singer-songwriter, British bi-con Dodie Clark) visited this cool-looking bookshop called Gay’s The Word.

Little did I know this shop is two Tube stops away from my flat. But, in the moment, heart tingling with the promise of studying in London, I tucked this post away in my “London” Instagram collection.

At some point today, one of my old cravings hit. I was struck with that devilish, insatiable urge only a few people, like my best friend Sam, truly understand.

I was craving boba tea.

A quick search on Google Maps reminded me of the boba tea place I had passed by when I saw “The Killing of a Sacred Deer.” The shop is called Chatime and is right across from the Giraffe I had seen earlier.

As I was looking into which station would be best to depart from, I realized Chatime was a block down from Gay’s The Word. So, I decided to look into both this evening. The boba was fine, but for sure, Gay’s the Word was the real highlight of the trip.

Founded in 1979 by the Gay Icebreakers, Gay’s the Word is the only queer-specific bookstore in the U.K. 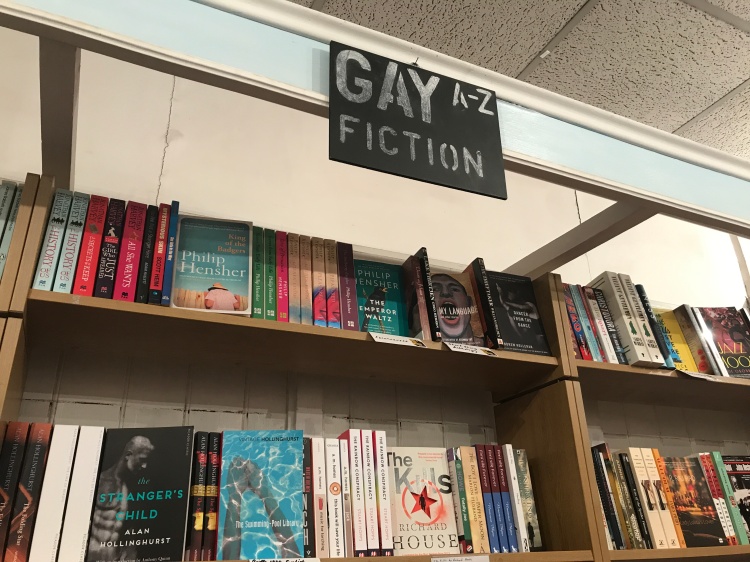 It was revolutionary for its time for two main reasons:

1) LGBT books were largely unavailable, especially in the U.K. British LGBT representation in literature was so sparse that a lot of Gay’s the Word’s stock had to be imported from the U.S.

2) If LGBT material, such Gay News, was available, it was through the nebulous vessel of snail mail.

Of course, there is no revolution without suffering. In 1984, Gay’s the Word was subjected to a raid. Books by Tennessee Williams, Gore Vidal and Allen Ginsberg (who would later come to do a reading here) were seized.

And in turn, with revolution comes liberation. From 1984 to 1985, the Lesbians and Gays Support the Miners group hosted meetings at Gay’s the Word.

This solidarity movement between the queer community and the miners on strike was been depicted in the 2014 film “Pride” (featuring my gay bae, Andrew Scott).

When I visited this evening, it was near closing time. It wasn’t too crowded. The only other customers there were two queer intellectuals. They were clearly acquaintances.

They were just supposed to duck in, have a look around and go out for coffee after this. But faced with all of these excellent books in the flesh, they were swept up in their own little vortex of exchanging novel titles, LGBT conference stories and even asking the staffer for his own recs.

A fragment that stayed with me was one of the men asking for books about love and authenticity. He backtracked, clarifying that he didn’t mean romantic love. He meant self-love, almost self-confidence.

It may have sounded like a strange concept on the surface. But I understood. I had just read an essay on LGBT outlet Into about the struggles of being authentically queer at Thanksgiving dinner. There’s no Thanksgiving in England. Still, I wondered if he was anxious about coming home for Christmas.

Admittedly, when I first walked in, I was a bit grumpy because I was looking at a lot of content by and for gay men. I was pleased to walk further into the shop and see that queer ladies were also being represented.

What’s more is that every spare inch of Gay’s the Word is covered in bulletins, posters, prints and post-cards. And in one corner, I saw scans of two pulp lesbian covers. 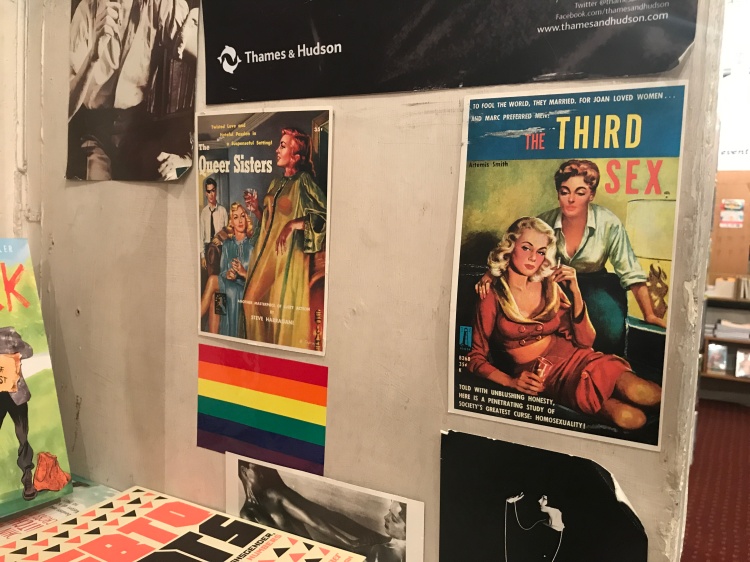 I’ve encountered my fair share of lesbian pulp novel covers ever since I followed Secret Lesbian Society on Instagram.

I’ve come a long way in my LGBT journey. More than being upset, I am merely tickled at how queer women are simultaneously objectified and demonized. As if women experiencing and owning up to lust isn’t terrifying enough, their same-sex desires are linked with other sinister terrors.

In the world of lesbian pulp novels, men have to keep their eyes peeled for lonely women, unmarried women and even women who are simply in charge, who display dominant attitudes. Men must stay vigilante for those sneaky, succubus-like lesbians.

As a bisexual journalist who has written extensively on LGBT issues and wants to write a book on the subject one day, I couldn’t dream up a better kind of social-intellectual space. Maybe Politics + Prose. Probably, Busboys + Poets, because their activism and their food are delicious.

I think this space sparkles to me, too, because even though Gay’s the Word does sell erotica and informational sex books, it’s not an inherently or overwhelmingly sexualized place.

A lot of gay culture centers around raunch: night clubs and bars, chief among them. So it’s nice to have a space that encompasses the full range of queer expression, including sex. But still, sex isn’t the main focus or end-all, be-all.

I am glad that this little piece of old-school LGBT culture is still alive and well in London.